The new agreement signed by Renault and Elf - some 35 years after the partnership began. 1967- Birth of the Elf group and its operations in F1 marks a whole new era for this remarkable success story.  Since 1968 we have shared a string of victories as Elf launched out in a unique form of sport and human endeavour: Formula 1, but the best is yet to come in terms of technological, commercial and sporting achievements. Presence in racing is vital to the success of a firm in terms of technology.

Our common values - daring, innovation and high-tech excellence - enable us to respond to the most stimulating challenges, the greatest of which lies in the Formula 1 arena, to win back the World Championship. 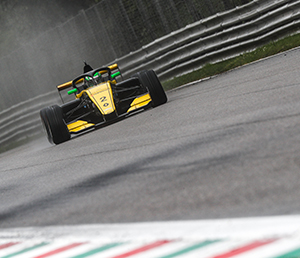 Elf is not simply one of the sponsors of the Renault F1 Team. The Group is also a highly important technical partner. Over many years, Elf has developed bespoke products for Renault. Elf has two research and development teams dedicated to Renault. The work of these teams relies on extremely advanced studies and analysis designed to develop technical solutions to get Renault and Elf back on the road to success.

The engineers made the most of the time away from F1 to think up and design a normally-aspirated 3-litre V10 engine. At the height of the duel between Senna and Prost - teammates and rivals at McLaren -Williams, drivers Riccardo Patrese and Thierry Boutsen had their work cut out. This was a great victory for the French V10 and one that signalled many more to come.

The following year, Patrese was rewarded with a win at his home circuit of Imola. Boutsen took his third victory in Budapest, but it was a season of mixed fortunes. Whereas in 1989, Williams-Renault scored 77 points to finish second behind McLaren (with 141 points), in 1990 they had to be content with fourth place and 57 points. The long-awaited progress would only come to fruition a year later with the return of Nigel Mansell.

As the 1992 season dawned, anything looked possible! Mansell went on to take five straight victories at the start of the season! He was unbeatable. His state of grace continued over the summer with 3 more precious victories and he crowned the season in fine style at the Portuguese Grand Prix. Never in the history of Formula 1 had a driver won so many races in a single season.

No end to the drama or the racing

Ayrton Senna replaced Mansell in 1994. Williams-Renault-Elf was still performing - it seemed as though nothing could upset the momentum of the Franco-British team. Nothing, except the very worst: the tragedy at Imola on 1st May. Senna went straight on at the Tamburello curve. The shock was terrible. Formula 1 was suddenly mourning one of its greatest talents. Michael Schumacher and Flavio Briatore for Benetton presented Renault and Elf with another double in 1995 before Williams regained supremacy in the next two years through Damon Hill (1996) and Jacques Villeneuve (1997). Eleven World titles in six years signalled that the time had come for the French manufacturer and oil company to take a break. To bring the book of records to a temporary close, before writing a new chapter in the early years of this new millennium.

EVERY DATES OF THE CHAMPIONSHIP 2019